Micro grids have been around for as long as the electric generator. Indeed, before we built a highly centralized grid, electricity was generated, distributed, and used in small micro grids. And interestingly enough, these very first micro grids were DC micro grids.

They were built by Thomas Edison in New York City, prior to Tesla’s introduction of multi-phase alternating currents (AC) that changed the electricity generation, distribution, and consumption for good.

Today’s micro grids are very different. They are driven by our society’s quest for sustainable and renewable power generation, the need for a more flexible, versatile, and resilient power system, and the ability to effectively control power flow with power electronics converters.

There are three main types of micro grids:

Customer micro grids are true micro grids that are self-controlled subsystems connected to the grid downstream from a point of common coupling (PCC). Utility distribution microgrids are distribution subsystems, part of the regulated grid, that are owned and operated by a utility with the goal of helping the utility manage DER portfolios and improve reliability on the network. Remote micro grids (power systems) are islanded power systems that never operate in grid tied mode.

Here we focus on the grid tied micro grids that can operate both in the islanded and grid-tied modes.

Micro grids are complex systems since they have to provide all the functions of a large grid, including dynamic control and stabilization, yet with a much simpler control infrastructure, smaller number of generators, and significantly smaller system inertia.

The dynamics of modern micro grids span time constants ranging from microseconds to seconds and all the way to minutes and hours. While the utility grid has a much larger set of resources available for grid control and stabilization, micro grids are expected to achieve the same power quality with a drastically smaller number of energy resources and often with large penetration of intermittent power sources (PV, wind etc.).

And this is why control and stabilization of micro grids is complex.

Microgrids are expected to provide a subset of the 6 key functions: 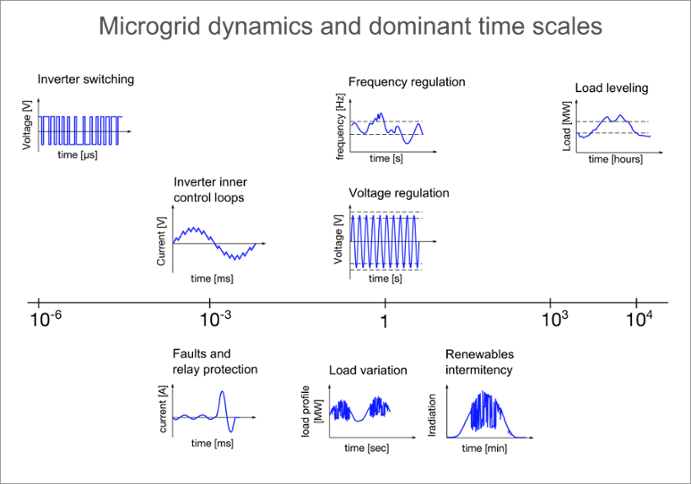 Microgrids are expected to provide a subset of the 6 key functions:

This article was originally published in the Typhoon HIL website under Blog by Ryan Deyo. Rest of the article you can read here.

This site uses Akismet to reduce spam. Learn how your comment data is processed.

You can find out more about which cookies we are using or switch them off in settings.

This website uses cookies so that we can provide you with the best user experience possible. Cookie information is stored in your browser and performs functions such as recognising you when you return to our website and helping our team to understand which sections of the website you find most interesting and useful.

Strictly Necessary Cookie should be enabled at all times so that we can save your preferences for cookie settings.

If you disable this cookie, we will not be able to save your preferences. This means that every time you visit this website you will need to enable or disable cookies again.